A Tribute to Alber Elbaz 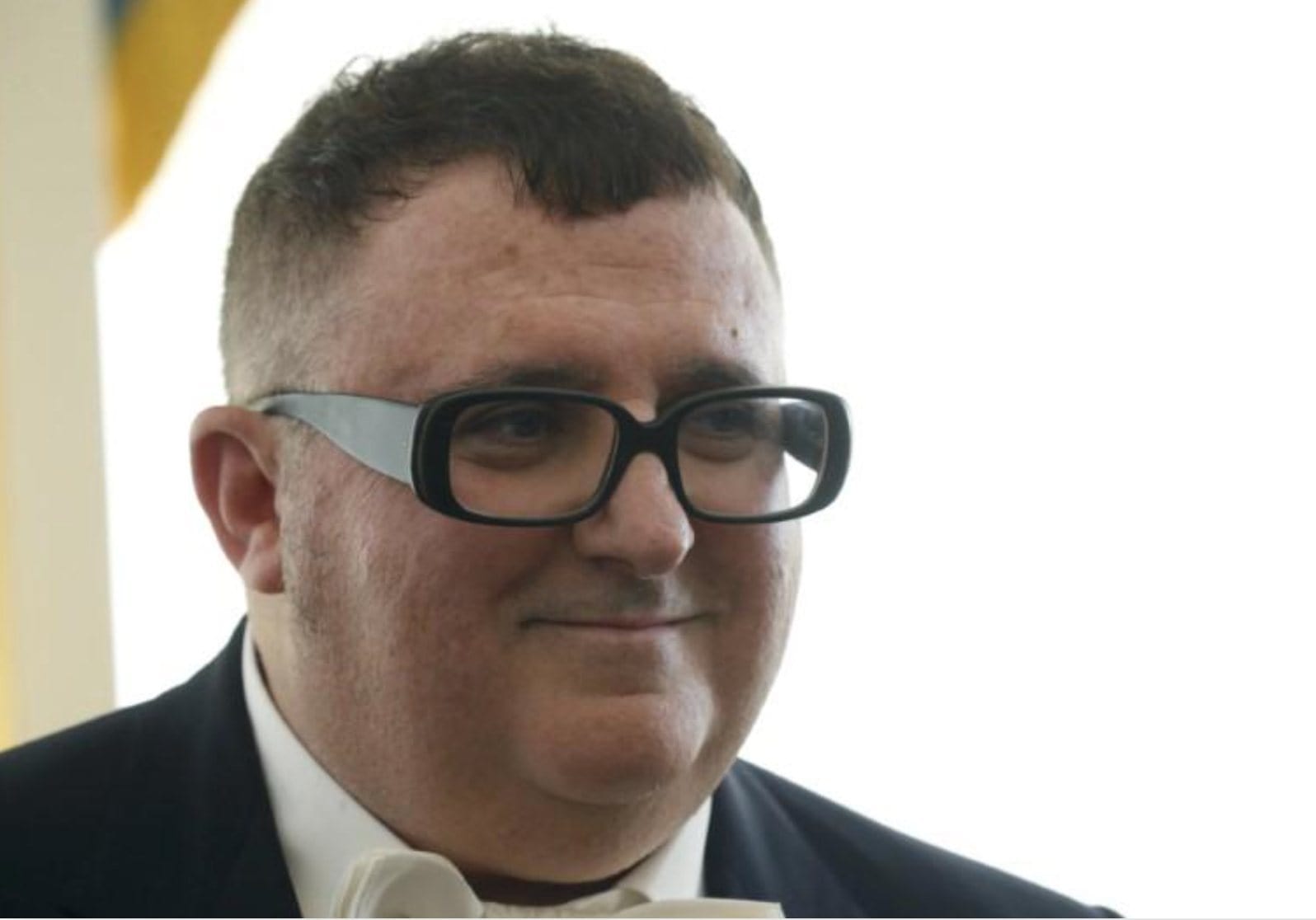 A week after Alber Elbaz passed away on April 24, having been hospitalized with Covid-19, the world is still in disbelief. As the reality of his death sinks in, a tribute to this memorable, bespectacled, proudly rotund figure of fashion.

Elbaz’ s contribution to fashion was immense. He was an innovator in terms of cuts, chic silhouettes and textiles at Guy Laroche, Yves Saint Laurent Rive Gauche and Lanvin. After he left Lanvin in 2015, he became obsessed with technology. Four months ago, he launched his AZ Factory, unveiling outfits made with high-tech fabrics that used 13 different elasticity levels to “shape” a woman’s body. AZ brought freshness, modernity and audacity to contemporary fashion.

Elbaz has joined the “Immortals”, the pantheon of great designers that includes Yves Saint Laurent, whose boots he filled in 1999, and “Kaiser” Karl Lagerfeld, spiritual grandfather of fashion, who died two years ago.

The first time I met Alber Elbaz was in 2016. We had lunch with his partner Alex Koo at Japanese restaurant Hanawa, just behind Chanel on Avenue Montaigne in Paris. We were seated in a little VIP room on the second floor. We were supposed to stay for an hour but ended up talking for three, discussing nature, Israel, spirituality and fashion’s latest news. I never expected him to be so warm, generous and passionate. He was curious and asked many questions. As we wolfed down endless plates of sashimis, he justified his hearty eating by saying he had been depressed after leaving Lanvin. He had not been able to even think of picking up a pencil and drawing anything for months.

I was introduced to Elbaz by Ralph Toledano, who had hired him in 1996 to resuscitate Guy Laroche. Toledano had given him his first creative director job and remained a close friend. Toledano arranged for me to meet Elbaz to get material for my book How luxury conquered the world, the inside story of its pioneers (Paris: Miss Tweed Publishing, 2019). Back then, I was Reuters’ European luxury goods correspondent.

I knew Elbaz the star designer, but very little about Alber the man. After his Lanvin shows, I had regularly thrown questions at him amid the crowds of journalists, fighting to stick a microphone under his nose. Backstage, the brand’s extravagant owner, Taiwanese Madame Wang, would appear and fête Alber with a gigantic bouquet of white roses. Trying to satisfy the hungry journalists, Elbaz would say in his trademark, slightly wailing voice: “Women just need to love their body” or “I love them and work only for them.”

Elbaz infused life into Lanvin for 14 years and succeeded in getting France’s oldest couture house to make as much as 235 million euros in sales at its peak in 2012. Three years later Madame Wang sacked him, calling him a traitor for having invited Qataris to invest in the fashion company.

After that first lunch at Hanawa, Elbaz and I met several times for a bite at places like the restaurant of Le Meurice, the five-star hotel across the Seine from his Left Bank flat, or the café restaurant Le Fumoir near the Louvre, or a tiny French restaurant called Le Bon Saint Pourçain behind Saint-Sulpice church. I would try to squeeze into our conversations some questions about his life and adventures, but he would invariably turn the tables and grill me about what I knew of fashion news. I became the one giving out information, not him.

I was present in 2016 when Elbaz received the insignia of Officer de la Légion d’Honneur, one of France’s most prestigious accolades, from then Culture Minister Audrey Azoulay. The ceremony, held at the ministry’s salons, was attended by more than 100 people. Among them were familiar faces from Lanvin, including former chief executives Thierry Andretta, now head of Mulberry, and Paul Deneve, who was then at Apple. Ralph Toledano was also there along with many from the fashion industry. 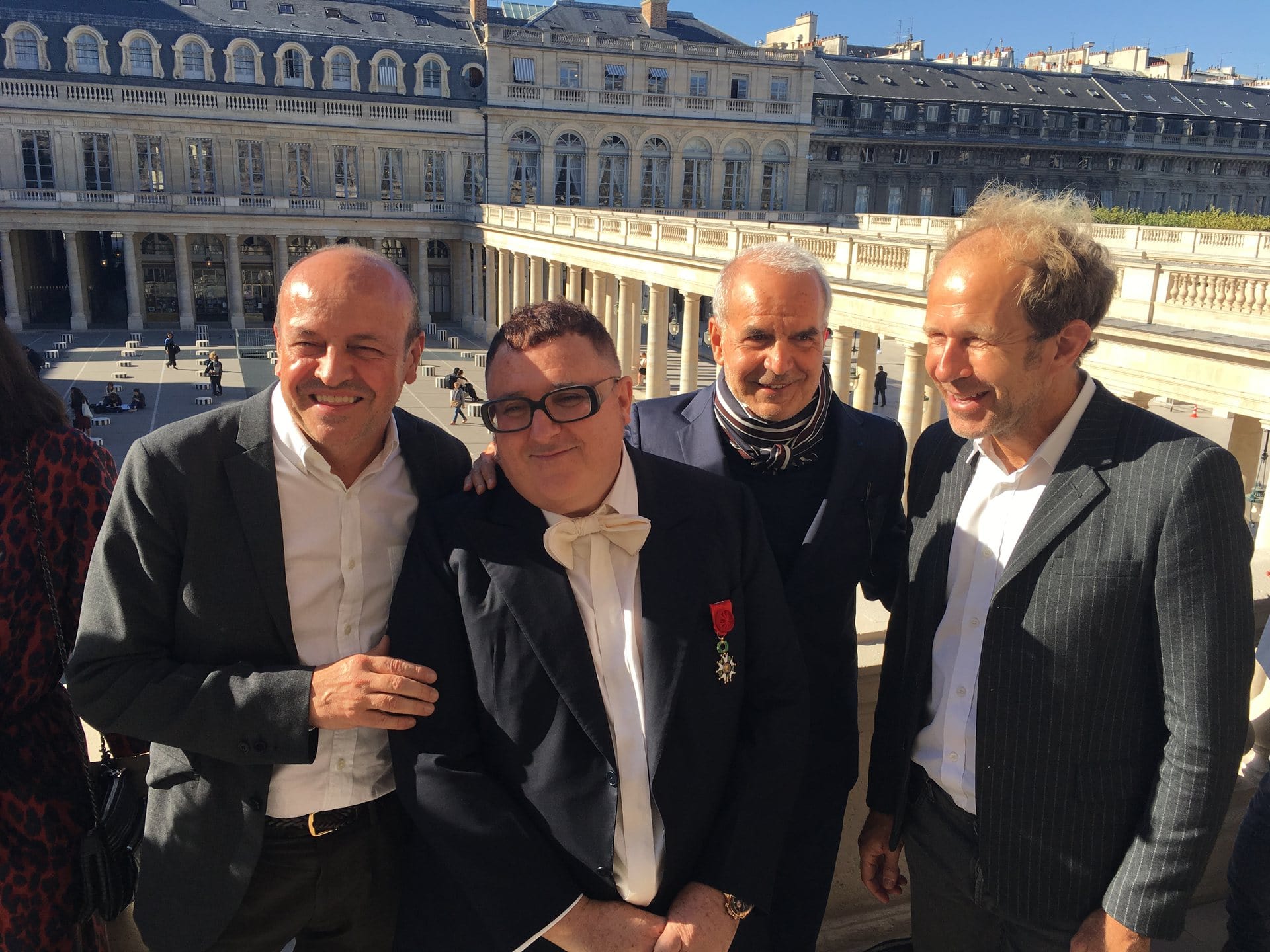 The atmosphere was like an alumni gathering, with stylists, fashion editors and buyers who had not seen Elbaz since his departure from Lanvin the previous year. At the opening, Elbaz exclaimed: “Wow, what a fabulous front row!” Standing in front of him were actresses Kirstin Scott-Thomas and Demi Moore, and U.S. Vogue editor Anna Wintour. “I am still in love with fashion, and I miss fashion,” he admitted. 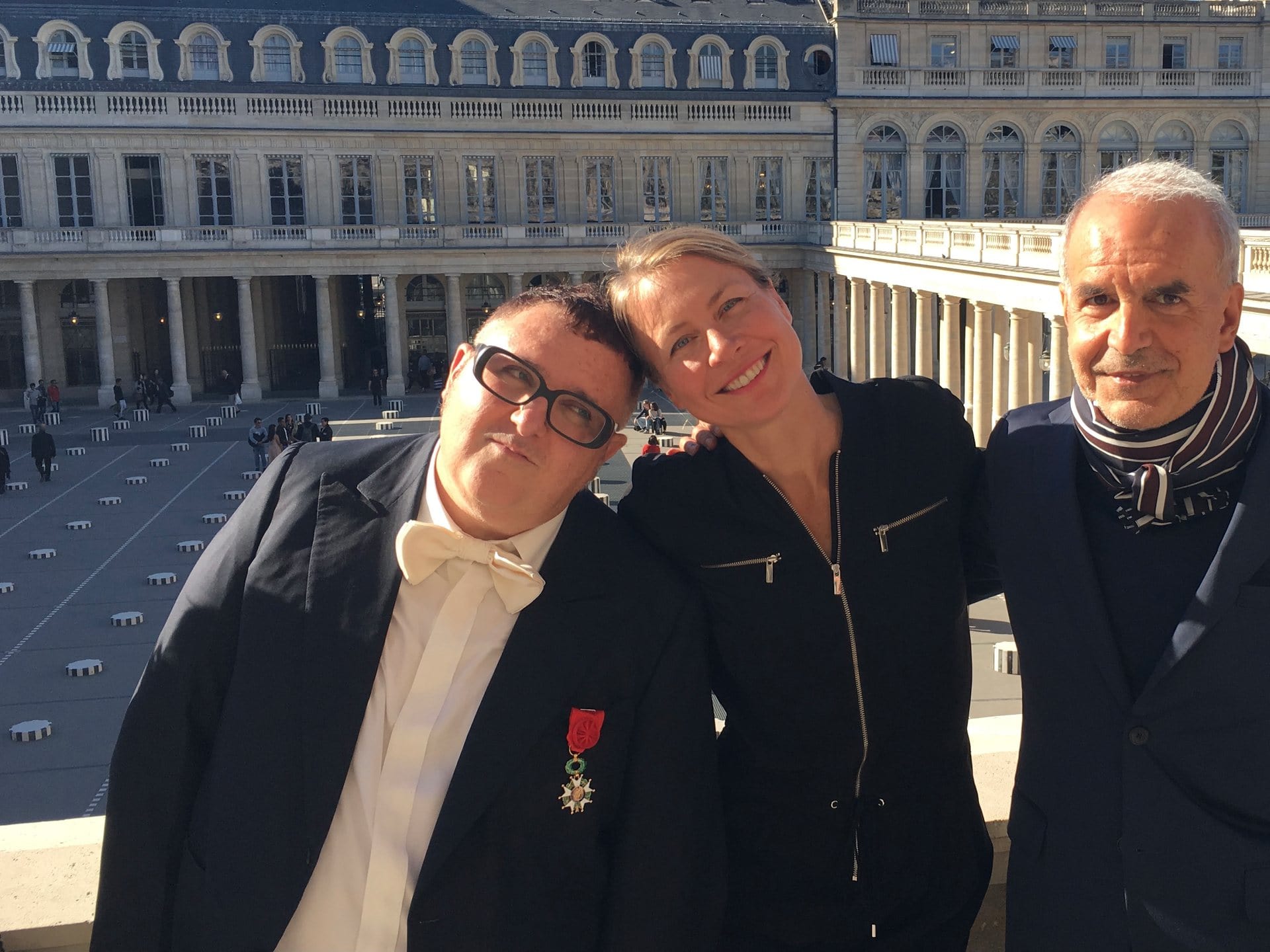 Afterwards, he announced he had created a perfume called Superstitious for French perfume house Editions de Parfums Frederic Malle. This niche perfume brand has been part of U.S. cosmetics giant Estee Lauder since 2014. As his perfume was distributed to guests, he closed with the words: “I invited you today to a show with no dresses. Instead, you will go out with a perfume of a dress.”

I also had the joy of interviewing Elbaz at the Conde Nast International luxury summit in Muscat, Oman. He came dressed in black, with his classic big shoes and no socks, and proudly sporting his Légion d’Honneur insignia. 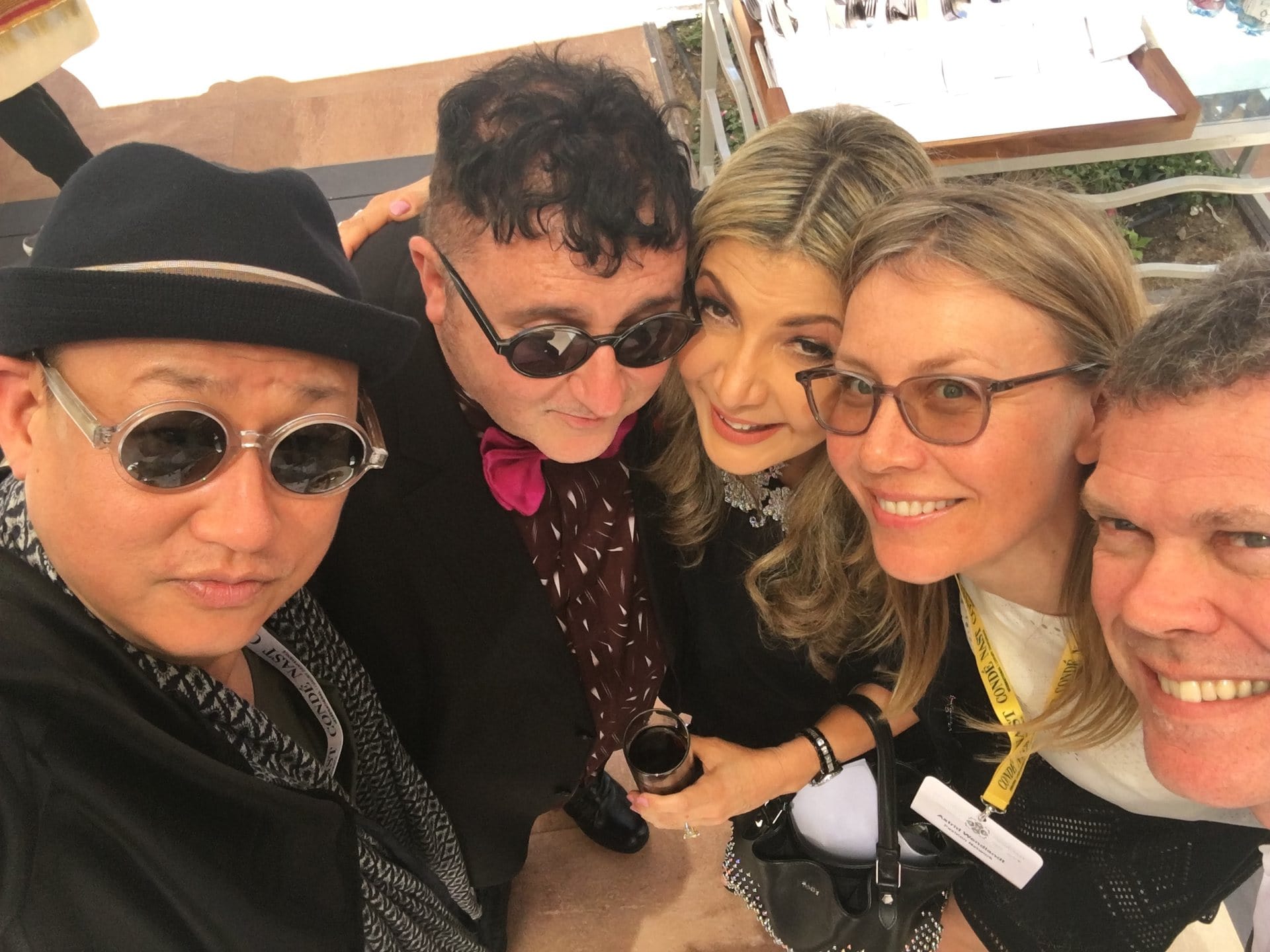 At the conference, Elbaz agonized over the stress and unhappiness in the fashion industry, which he attributed to big brands multiplying their collections to grab headlines and generate traffic in their stores.

“Every time I speak with my fashion family, I hear only complaints,” he told the gathering, held in a five-star hotel on the shores of the Gulf of Oman. “Too many shows, too many collections. Moscow fashion week? No wait, it's India fashion week. Too much confusion. Which season are we seeing now? Fall/Winter? Spring/Summer? No, it's Resort. No, it’s Cruise 2017. And just more and more, and it’s endless. How come nobody’s happy? Too much fear and not enough love.”

“When we create, we must first begin with a dream, and an intuition. Marketing comes later, not before. Yes, I know that using intuition is risky. But we all know some of the best innovations in history happened because people trusted their intuitions and went for it,” he told the conference.

On the role of the contemporary fashion designer, Elbaz said: “My psychiatrist once asked me, if women today can buy a new face, new lips, new boobs, new butt, new hair, new skin and God knows what else, maybe the body is the new dress? Maybe that’s the reason why there are so many jobless designers? And if the body is the new dress, what is the role for us designers? To dress? Or to undress?” 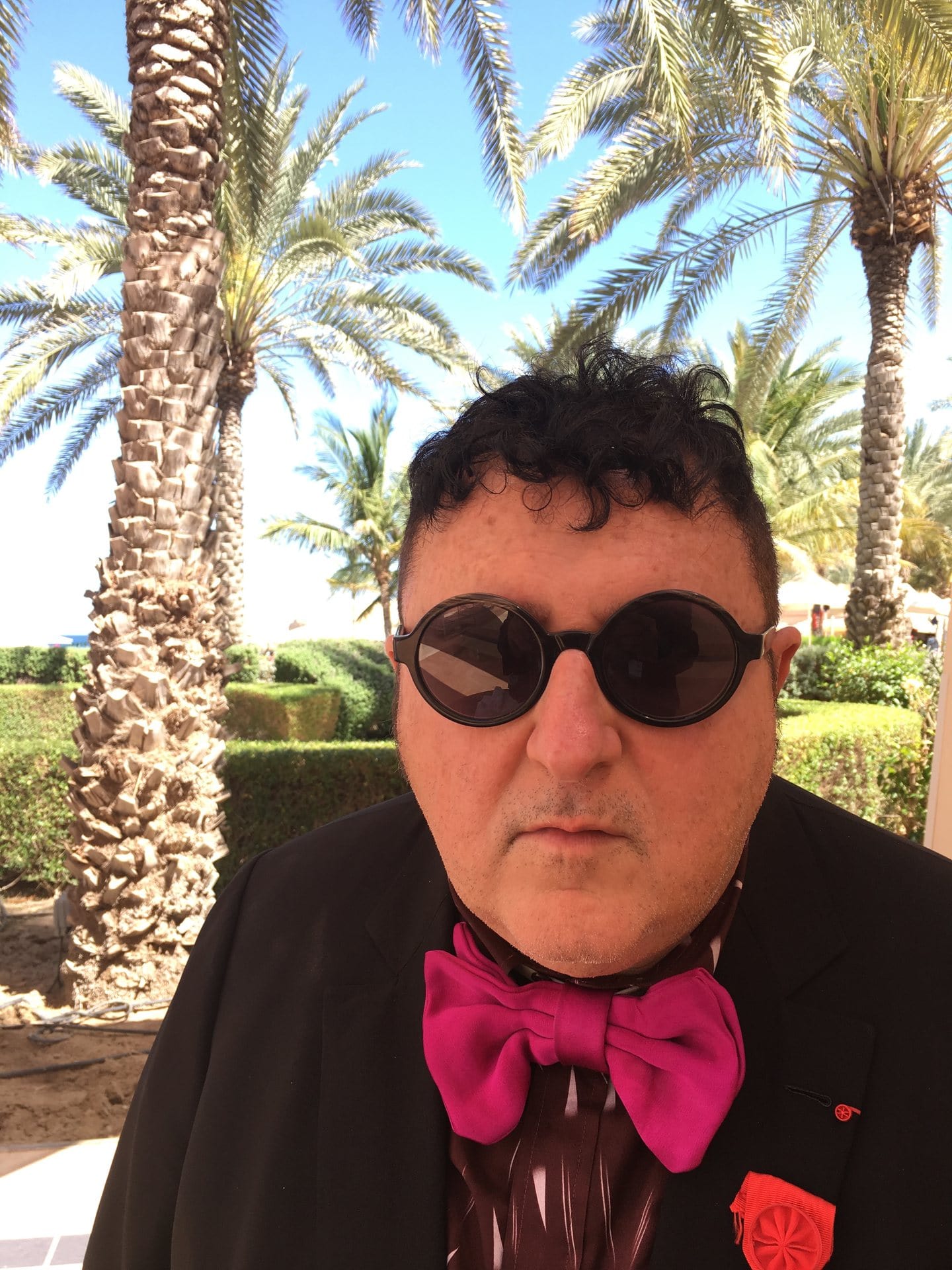 After I published the story, Elbaz looked everywhere for me in the hotel to ask me to change it. I had gone for a midnight dip in the sea and only found out later that Elbaz was looking for me. “I was so scared I could not talk to you,” he said over the phone. “People told me you had disappeared.” He asked me to remove the names of big brands I had mentioned in the story. He was still on the market to work for them and knew how sensitive these maisons could be.

The last time I partied with Alber Elbaz was for the launch of my book, held at Shakespeare & Company, the oldest English-language bookshop in Paris. There, Elbaz fell into the arms of Alain-Dominique Perrin, one of the heroes of my book, who still works for Richemont, and also met famous French writers Marek Halter and Sylvain Tesson.

Little did I know that the next day Elbaz and Perrin would announce that Richemont had agreed to back Elbaz’s new fashion venture, for which there was still no name. Elbaz said it would involve technology but there were no details.

Eighteen months on and during Paris Couture Week this January, Elbaz launched his AZ Factory. It brought a new vision, with high-tech outfits and “sneaky pumps” -- running shoes that he said were inspired by women’s fondness for “the pointy thing about pumps that elongates my legs”.

The designer lived up to his reputation for exploring textile innovation. What will become of AZ Factory now Elbaz is gone? The project was so tied to the man that some fear Richemont will eventually fold it. Let’s hope that doesn’t happen. It would be perceived as a cold-hearted financial decision, shattering the hopes of those who believed in Elbaz’s vision. Rest in peace Alber. Your memory will be forever starlight.