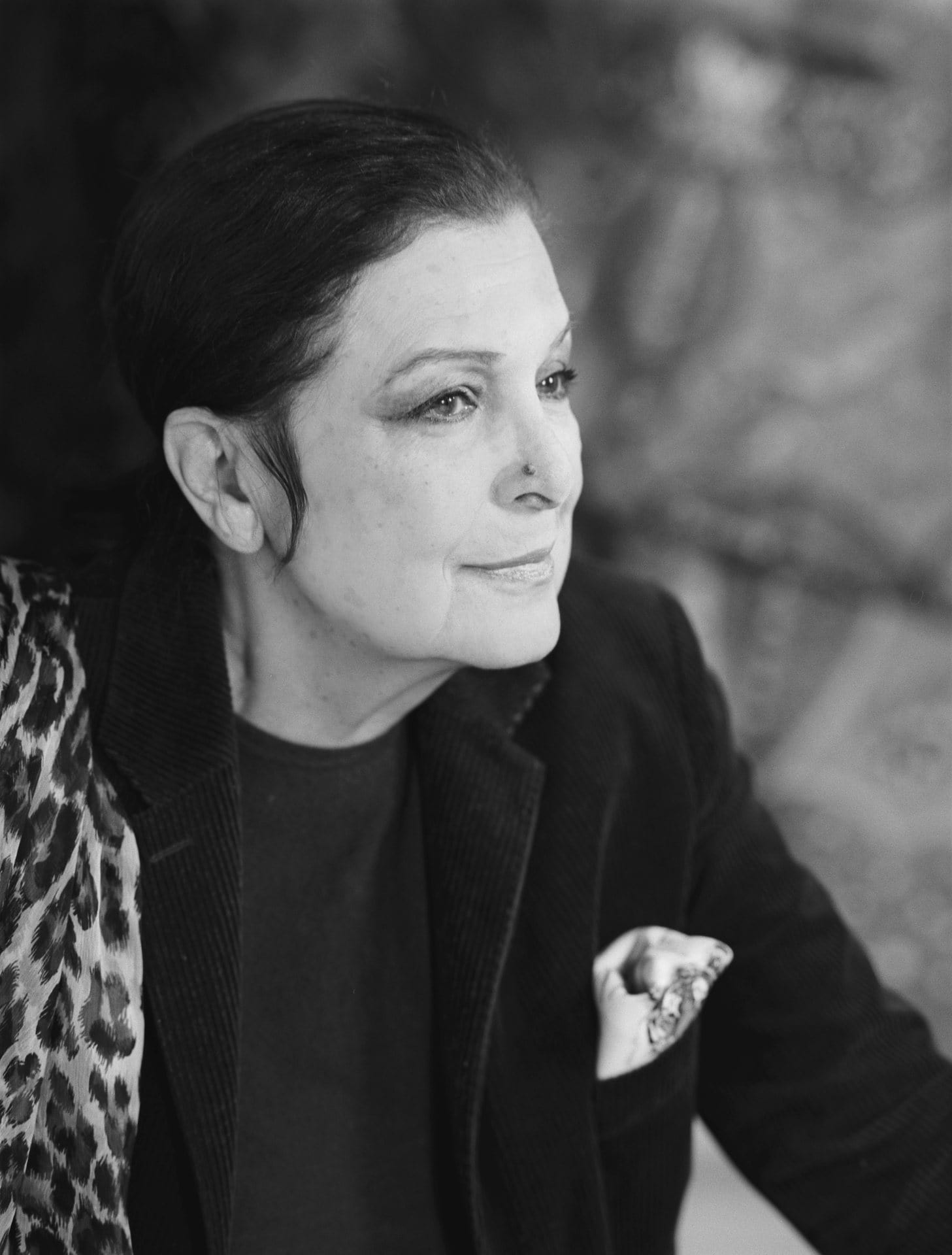 Leila Menchari, Hermès’ in-house artist who created fairy-tale-inspired shop windows for the brand’s flagship at 24, rue du Faubourg Saint Honoré for more than four decades, passed away on April 4 at the age of 93. Menchari succumbed to the coronavirus at her nursing home in the 17th arrondissement in Paris.

Menchari’s spare-no-expense shop windows told powerful and imaginary stories with audacious, unexpected objects she designed herself or ferreted out in antique shops, bazaars and flea markets. Her window displays made audacious use of bright colored silks, ceramics, feathers, seashells, exotic plants, dried flowers, moss as well as glass, stone, marble or wood sculptures. Memorable fantasy animals included a white ostrich leather rhinoceros with a gold-plated horn and toes and a flying horse made from flowers. She always refused to sell any of her creations which Hermès stored for years after they were displayed. 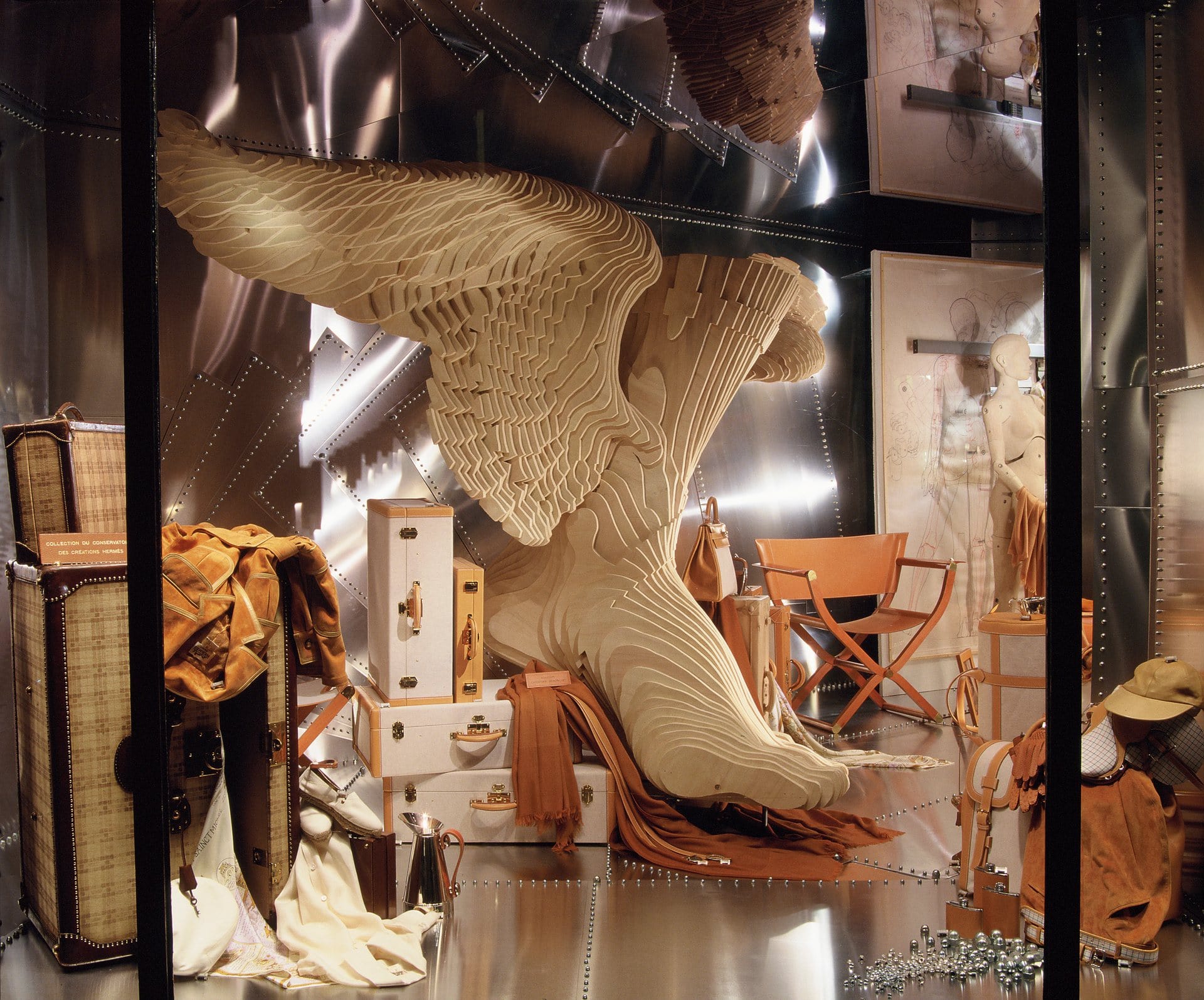 “I try to elevate myself beyond the frontiers of what is rational, to go beyond the visible,” she wrote in a note to the late Jean-Louis Dumas, Hermès’s charismatic leader who ran the maison from 1978 to 2006 and with whom she would spend Christmas eve. “They treated me like family and they are still family to me to this day,” she had said of Jean-Louis Dumas and his wife Rena. She would travel with them to Asia, India and Africa. She, in turn, would play host at her house at Hammamet in her native Tunisia, where Hermès’ nose Jean-Claude Ellena would later find inspiration for the perfume Un Jardin en Méditerranée.

As with all designers and artists at Hermès, Jean-Louis Dumas gave her carte blanche. “I could really say what I wanted,” she said. Every time a new shop window was presented, curtains were pulled down and champagne was popped. Menchari installed four different decors at the flagship each year, inspired by the theme chosen by Dumas.

“Each décor had its colors, its harvests, its ambiance, its temperature and its light. […] White light in the summer, red in the autumn, frozen in the winter and fresh in the spring,” she was quoted saying in Leila Menchari, la Reine Mage, co-published by Hermès and Actes Sud in 2017, the year a retrospective of her work was presented at the Grand Palais in Paris. Hermes Chief Executive and Jean-Louis Dumas’ nephew Axel Dumas, wrote about her décors in the aforementioned book: “Color-rich like a field of flowers, hot like the desert, rich like an oasis, each of these worlds diffused fragrances of an oriental fairytale in which lived fantastic animals, vivacious and odorous plants, languid nymphs or the great winged foot of an ancient God.”

Menchari was a free, profound and multi-dimensional person. During an interview in 2015, she sat in her office like a queen, her nails impeccably done, her eyes heavily made-up, her hair perfectly arranged. It was not an office but a curiosity cabinet. The walls were covered in ostrich skin and elm wood. Pieces from her previous shop windows were displayed: a white organza skull, Kelly and Birkin bags in biscuits, plastic, tulle or anything but leather. In one corner stood the architect’s table that the late Robert Dumas, Jean-Louis Dumas’ father, gave her. There were also many photos of her when she was younger, resembling a mix between actress Romy Schneider and a sphinx, standing by an eternally smiling Jean-Louis Dumas.

Even though she was over 80 and worked only occasionally for the company on specific decors to present new collections, Menchari kept an office at Hermès for a very long time. “Leila is a free electron. She lives outside of hierarchies and normal rules,” said Christian Blanckaert, who ran Hermès’ French and international operations for many years. He admitted he once suggested to her putting products in her shop windows that could sell better than the ones Menchari intended to display, to which she curtly replied: “Nobody tells me what I should put in my shop windows.”

Leila Menchari in her garden in Hammamet in the 1970s

The daughter of a lawyer and great-grand daughter of the last Sultan of Tuggurt, Leila Menchari came to Paris at the age of 18 to study at the École nationale supérieure des beaux-arts. A friend recommended that she show her drawings to Annie Baumel, a quintessential Parisienne in charge of shop windows and decorations for Hermès. When they first met, Baumel told Menchari: “I can tell that you’re a dreamer. So, draw me your dreams.” The young artist knew such offer would not present itself twice. After seeing her work, Baumel told the late Robert Dumas: “Leila draws very well so I would like to keep her.” And that was it. Menchari was hired in 1961. Over the years, her responsibilities grew and she eventually replaced Baumel.

"Many of us at Hermès have learned a lot from Leïla,” said Hermès Creative Director Pierre-Alexis Dumas in a statement published on April 5. “She taught us to look at the world through the prism of color. She was a storyteller without equal that enchanted the world. We are infinitely grateful to her for all that she has done for us, that she passed on to us.”