Luxury chiefs turn global benefactors in dash to save the world 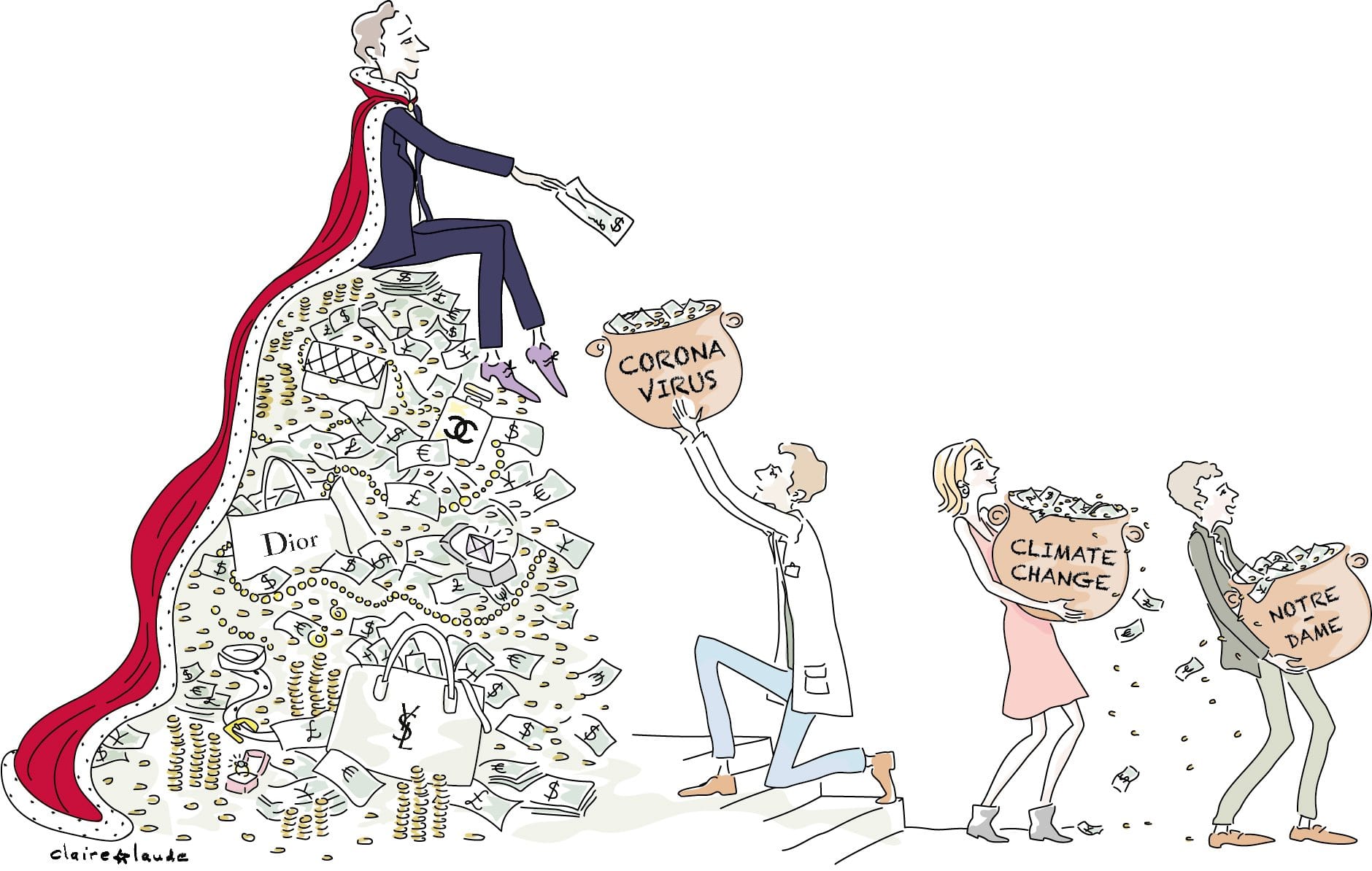 They are the new benefactors of this world: Bernard Arnault, internally sometimes called “God” and CEO of the world’s biggest luxury group that owns Louis Vuitton and Dior, François-Henri Pinault, family scion and boss of Gucci parent Kering, Giorgio Armani founder of the Armani empire. And the list goes on.

In the past week, luxury, fashion, cosmetics and some drinks groups have announced a series of initiatives aimed at fighting the spread of the coronavirus. Some gave cash to health authorities, others free alcohol and bottles to produce sanitizing gel for hospitals, pharmacies, retirement homes and supermarkets. L’Oréal, on top of providing gel, also froze hairdressers’ shampoo bills until further notice. The speed at which companies in the cosmetics and luxury industries have stepped into the fray is not only revealing of their economic might – their sector has been one of the most buoyant in the past decade. It is also telling of how seriously they take their social responsibilities and their role as global do-gooders.

Centuries ago, a handful of well-endowed monarchs and churchmen came to the succor of those in need. In return, people vowed them allegiance and looked up to them as powerful protectors. Today, people look to newly minted princes like Arnault, Pinault and other prominent members of today’s capitalistic aristocracy for help. And many will vow them allegiance in return. LVMH’s 156,000 staff will take pride in their employer’s contribution to the “war” effort against the coronavirus by supplying sanitizing gel to health authorities in France, in CD bottles with LVMH branded on them. People outside of the group and of the luxury business will join the applause but some will also remember that LVMH owns some of the country’s most profitable brands. The Paris-based group last year generated more than 7 billion euros in net profit and ran up a cash pile of 5 billion euros as of Dec.31. That gives it ample latitude to be generous and strengthen its image as benefactor and role model.

Same goes for L’Oréal, another gem of France’s industry, which makes around half of LVMH’s revenues and in 2019, pocketed 4 billion euros in net profit and finished the year with 2.4 billion euros in cash. The French cosmetics giant’s more than 86,000 employees found out this week their employer had, like LVMH, also started producing hand sanitisers and would deliver it free of charge to public health authorities, pharmacies, supermarkets and retirement homes.

Companies understand that demonstrating solidarity in times of crisis is crucial to attract and retain talent. Many people, particularly the younger generation, expect their employers to have a credible ethos and make good on its promises when times are difficult. The value of a company today is no longer solely measured by growth prospects or earnings per share (EPS). How it reacts to public health threats, climate change and issues around women's rights and staff well-being has become just as important. Every company understands that it needs to tick a number of boxes in terms of good deeds to preserve its talent pool and remain competitive. Once the coronavirus crisis is over, people will remember who did what during these extraordinary times. Just as after World War II people remembered those who helped others and showed bravery, and those who sat on their hands.

Brand image is no longer about creativity and innovation only. It is also about making a difference. Consumers expect action. Some have accused major companies in the luxury and cosmetics industries of “green washing” - saying officially they want to save the planet while continuing business as usual and wasting vast amounts of natural resources. This time around, with the coronavirus, they have a chance to prove they are serious about making the world a better place and put their money where their mouth is.

In the past year, the world has been rocked by an unprecedented number of catastrophes: on April 15, 2019, a fierce fire engulfed Notre-Dame cathedral in Paris. Months later, unstoppable flames devasted Amazon and Australian forests and fauna, killing millions of animals. Luxury barons stepped in each time and handed out cash. Notre Dame was still burning when François-Henri Pinault promised 100 million euros to help rebuild it. Hours later, Bernard Arnault upped the ante with 200 million euros. Last summer, Arnault contributed $11 million to help fight fires raging in the Amazon – known as the "lungs of the world" for its capacity to absorb carbon dioxide and produce oxygen. Then, Pinault’s group Kering gave A$1 million to help fight fires in Australia.

French wines and spirits group Pernod Ricard this week donated 70,000 liters of pure alcohol to Laboratoire Cooper, a leading provider of hydro-alcoholic gels, to allow pharmacies to produce the gel themselves. In Sweden, Absolut Vodka, part of Pernod Ricard, gave vast quantities of alcohol to sanitizing gel producers in the country. Meanwhile, in the United States some of Pernod Ricard’s distilleries and production sites have also started producing sanitizing gel.

In Italy, where the virus has hit hard, Kering made a 2 million-euro donation to institutions in regions where are produced leather goods branded Gucci, Bottega Veneta and Saint Laurent. Giorgio Armani pledged 1.25 million euros to help fight the virus. Donatella Versace, along with her daughter Allegra Versace Beck, donated 200,000 euros to the intensive care department of Milan’s San Raffaele hospital, while Gucci CEO Marco Bizzarri gave 100,000 euros of his own personal fortune to hospitals in Italy. Fendi’s Carla Fendi Foundation donated 100,000 euros to the intensive care department of Rome’s Presidio Sanitario Columbus hospital. Luxury down jacket brand Moncler pledged 10 million euros to finance the construction of a hospital in Milan with 400 intensive care units. It remains to be seen if their hospital will be built as fast as the Chinese built their own in response to the crisis – in 10 days.

More donations and initiatives will be announced in the coming weeks. Companies in the luxury, fashion, cosmetics and spirits industries will suffer massive revenue losses in the months to come but their image could come out stronger and shinier if they play their cards right. Image is worth more than a few quarters of profits. It is a long-term game.