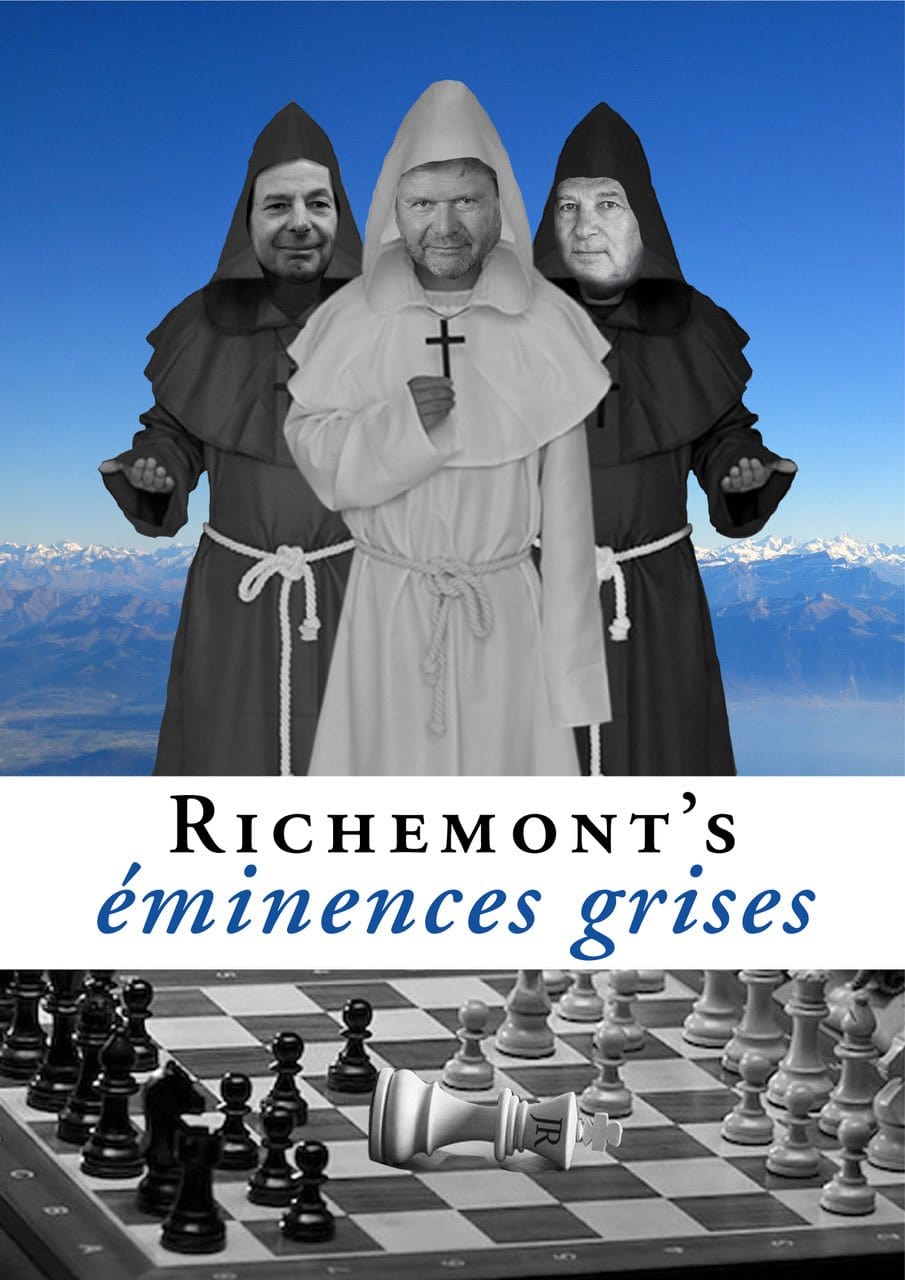 Johann Rupert gave his staff an earful during conference calls the week of June 15-19. The chairman of Cartier owner Richemont made it clear he refused to act under pressure and make the management and corporate culture changes his staff expected. During a conference call on Friday, open to some 3,000 managers, Rupert stressed that Richemont’s chief executive Jérôme Lambert – who many thought was about to leave - would stay in his job, at least for now, three people told Miss Tweed on condition of anonymity. Rupert also asked his managers to stop moaning and focus on doing their jobs.

Richemont employees are tired of the way Richemont is run, several group staff have said, asking not to be identified. Many of them are no longer ready to get their hands dirty for the 70-year-old South African billionaire who, they think, has become too disconnected from the day-to-day life of the group and its brands. And the mess over bonuses and pay, which were first cut and later reinstated in full, has not helped troop morale.

Philippe Fortunato, who in March left LVMH’s Givenchy where he was CEO, joined Richemont this week to look after the group’s fashion division, which includes Chloé and Alaïa. He will report to Jérôme Lambert, Rupert said in the calls.

Rupert has many qualities but defusing crises and making big decisions have never been his forte. Another problem is that his éminences grises, all of retirement age (another problem in itself), suggest different solutions and scenarios about what needs to be done to help the group. Rupert needs time to digest and weigh them all. Power isolates people. Those who have power at Richemont are not board members or CEOs. Everybody knows that. What really matters is who Rupert listens to and trusts. As in every human enterprise, whoever bends the boss’s ear runs the show. The word éminence grise comes from the monk Father Joseph who was the closest confident and adviser of Cardinal de Richelieu, the state minister of French King Louis XIII. Dressed in grey, Father Joseph became known as Richelieu’s éminence grise and the expression stuck to describe a public person’s secret adviser.

Rupert relies on three éminences grises. Each has its own agenda, style and methods. They are Alain-Dominique Perrin, Bernard Fornas and Richard Lepeu - all former Richemont and Cartier executives who built Richemont with Rupert and who, today, have several members of their respective families working for the group. Each runs his own clan. They coach their protégés and maneuver to place them in key positions within the group and its 20 brands. Their protégés in turn keep them informed of what is going on. And each éminence grise reverts to Rupert to give him their personal take on what is happening and their advice on what ought to be done.

All three men have left Richemont’s board but still act as advisers for the group and Rupert. The best paid is Alain-Dominique Perrin, without whom Richemont would not exist in its current form. Perrin gets 5 million Swiss francs a year for his consultancy work – more than Sophie Guieysse, the head of HR, who was ousted and paid 3.06 million Swiss francs last year. Perrin plays a strategic role as “the eye” of Richemont in terms of product design, harmony, communication and marketing campaign.

A natural-born leader, ADP is regarded as the father of “accessible luxury.” He resuscitated Cartier with Les Must de Cartier from the 1970s to the 1990s, a success that gave Richemont the financial firepower to make acquisitions and branch out into jewelry and fashion. Perrin became CEO of the group from 1999 to 2003 and afterwards remained involved as an executive board member and then as a non-executive board member. Perrin, who left the board in 2016, is perhaps the most authoritative figure of the three éminences grises. Unlike Rupert, he is capable of taking decisions quickly, a quality the chairman admires. “’ADP’ is regarded as the “godfather” in the group,” said one former Cartier associate. “ADP is really the closest to Johann. They have a pact and Johann knows that ADP will never betray him.”

There are three distinct clans at Richemont: “the Fornasians”, “the Lepeusians,” and “the ADP.” Among the ADP clan, one finds first his nephew Emmanuel Perrin, who worked many years for Cartier and now runs Richemont’s specialist watchmakers’ division, which also includes Panerai, Jaeger-LeCoultre and Piaget. He sits on Richemont’s executive committee. A group of senior Richemont managers sent a scathing letter to Rupert this week, which the blog Business Montres published, asking him not to appoint Emmanuel Perrin as Cartier’s new CEO if Cyrille Vigneron took Lambert’s position. They argued that Emmanuel Perrin was not fit for the job and criticized his track-record.

There is also Anne Dellière, head of Richemont’s marketing and strategic planning. She is very loyal to both ADP and Rupert and is highly regarded and respected by most Richemont employees. Many do not understand why she was never given a seat on Richemont’s executive committee or the position of CEO at one of the group’s brands. Her husband, Jean Bienaymé, is in charge of the marketing and communications department of Van Cleef & Arpels. Another “ADP” is Bérangère Perrin, his daughter based in Miami, who looks after Cartier’s client relations for Latin America and the Caribbean, and whose mother worked for Cartier in the past. Sonia Perrin, another daughter of ADP, was for 10 years in charge of communications and development at the Cartier Foundation for Contemporary Art – the first art foundation set up by a luxury brand. ADP founded it in 1984 to protect Cartier from attacks from left-wing intellectuals. Today, her LinkedIn account says that she runs her own communications company and has worked on many projects, including one for Chloé.

Then you have the “Lepeusians.” One high-profile member of that clan is Cartier Chief Executive Cyrille Vigneron. He shares similar personality traits with Richard Lepeu: cerebral, discreet, excellent in financial matters and organization. Another “Lepeusian” is Renaud Litré, Cartier’s international commercial director, who has been mentioned as a potential replacement for Vigneron at the helm of Cartier. And then there are Lepeu’s family members: his wife Pascale Lepeu, who is in charge of Cartier’s collections and worked for the group before they got married, and his niece Valentine Lepeu, who looks after store design at Van Cleef & Arpels.

Richard Lepeu is a smooth operator who never gives away any emotion or plan. He retired from Richemont in 2017 but still sits on the board of fashion online retailer YOOX-NET-A-PORTER, which belongs to the group. Lepeu joined Richemont in 1979.

After running Cartier and acting as the group’s chief operating officer and finance director, he served as deputy chief executive to Rupert from 2010 to 2012. Together with Bernard Fornas, Lepeu ran Richemont from 2013 to 2016 and then did the job alone for another year.

When Fornas and Lepeu were co-CEOs of Richemont, the duo worked well, several Richemont managers said. “Fornas was the front office and Lepeu the back-office,” said one former Richemont manager “The two got along and managed the group efficiently.”

Bernard Fornas, ex-Procter & Gamble, joined Richemont in 1994 from LVMH’s perfume-maker Guerlain where he was in charge of marketing. He first looked after Cartier’s marketing and, after a short stint at Baume & Mercier, he became CEO of Cartier in 2002. From 2013 to 2016, he was co-chief executive of the Richemont group, while Rupert was on sabbatical for a year. Fornas retired in 2016 but regularly keeps in touch with Rupert and involved with the group’s affairs. It was Fornas who called Rupert last month to tell him about Guieysse’s troublemaking and how she forced Richemont to halve pensions contributions to employees in North America, two sources with first-hand knowledge of the matter told Miss Tweed. Rupert was outraged when he found out and decided to show her the door after many people, including ADP, had already told him several times to do so.

Fornas has a brash personality. Like ADP, he speaks his mind and trusts his instincts. But Fornas does not have the same network of contacts as Perrin, which includes celebrities, artists and top CAC-40 bosses. Many industry managers describe Fornas as a buccaneer, a larger-than-life personality who loves to make jokes. These days, he spends a lot of his time with his horses in Normandy.

Many believe that Rupert’s smartest move would be to stop listening to the group’s “old guards” and pay more attention to what younger and more independent people tell him and take their opinion into account. But changing his ways and distancing himself from his old pals is not going to be easy. Therein lies Richemont’s biggest challenge.